welcome to my humble shrine to the beautiful lamprey, a wonderful creature that many people in this world do not appreciate enough!

read through this little web site and i will reveal to you the many features of the lamprey that make it a creature worthy of your respect...and even your love!

My Favorite Things About the Lamprey

why are they holes and not slits or crescents or even little ruffles? it is a mystery to which we may never know the answer! however, it is known that every lamprey possesses seven distinct gill pores on each side of their body, making for a total of fourteen. seven is a very nice number, i think. it's the lucky number, right? not as good as nine, of course, but nine gill pores would be a little too many on a lamprey, i think, so seven is the perfect number for them. very auspicious.

looking at the gills is also an easy way to tell the lamprey apart from other, similar types of fish! their hagfish cousins tend to have far more gill holes, while moray eels only have one gill hole on each side of their necks. although, when it comes to eels, looking at the face is probably an easier way to tell the difference...

you know it! many people may say this is the most creepy aspect of the lamprey, but these people are fools and cowards. true, it is unusual for a fish to have a circular, suction-cup-like mouth with rows and rows of teeth inside, but why must we fear the unusual? why is a jawless mouth less worthy of love and admiration than a jawed mouth? the leech association drives some people away, but are not leeches helpful and beautiful in their own way?

much like the admirable leech, lampreys can use their mouths to latch onto other animals and suck their blood. and what's wrong with that, i ask you? parasites are important in nature too! however, that isn't the only thing a lamprey's mouth can be used for: they are also helpful for latching onto rocks, which is very useful when they migrate back into freshwater to breed (like salmon do!) and have to swim against swift whitewater currents. some species of lamprey aren't parasites at all, and this is the only way they ever use their teeth.

that's right! lampreys and hagfish, being jawless fish, are some of the most "retro" animals out there! lampreys have been on this earth since the paleozoic era, about 400 million years ago! that was back when life was just starting to move onto land, and life forms like insects, plants with seeds, and the very first vertebrates were coming into being. they haven't changed much at all since then! why would you want to alter perfection, after all? compared to the lamprey, the meager time humans have been on this earth is less than a blink of the eye.

lampreys have survived at least four mass extinction events. they lived through the great dying in the permian era, they've watched the fall of the dinosaurs...they've seen so many species come and go and yet they're still around, doing the same things they've always done. i don't know about you all, but thinking about that really fills me with admiration!!! i can only hope these ancient creatures will survive us, too.

sea lamprey: although many lampreys live part of their lives at sea, only this one has been given the honor of being named "sea lamprey"! this lamprey can be found in many freshwater and saltwater areas in the northern hemisphere, but it is infamous for the trouble it has caused in the great lakes ecosystem after becoming invasive there. you can't blame an animal for that, though, and this is still a very charming lamprey deserving of your respect

pouched lamprey: the males of this type of lamprey grow a large pouch under their eyes when they grow up! very weird! some people think they use the pouch to carry rocks for making nests!

pacific lamprey: a type of lamprey that lives in the pacific, obviously! come check these guys out at the oregon zoo

now i don't think an animal needs to be useful to people to be interesting and valuable to learn about, but i know a lot of people do, so here's some of the ways lampreys have been important to people and the ecosystem!

hagfish: these are jawless fish, just like lampreys! one thing that sets them apart from lampreys, however, is that they don't even have a vertebral column. no spine! they are also very talented at making slime, sometimes to legendary results.

eels: these fish have jaws but they are long and slippery, much like a lamprey. they come in many types, but did you know that some of them have secret extra jaws?

sea snakes: these aren't fish at all, silly!! but still...the shape is similar...and they do live in the water...

worms: there are many types of worms in this world and some of them are a bit like a lamprey?

tube: if you abstract a lamprey to its most basic shape, this is what you get. 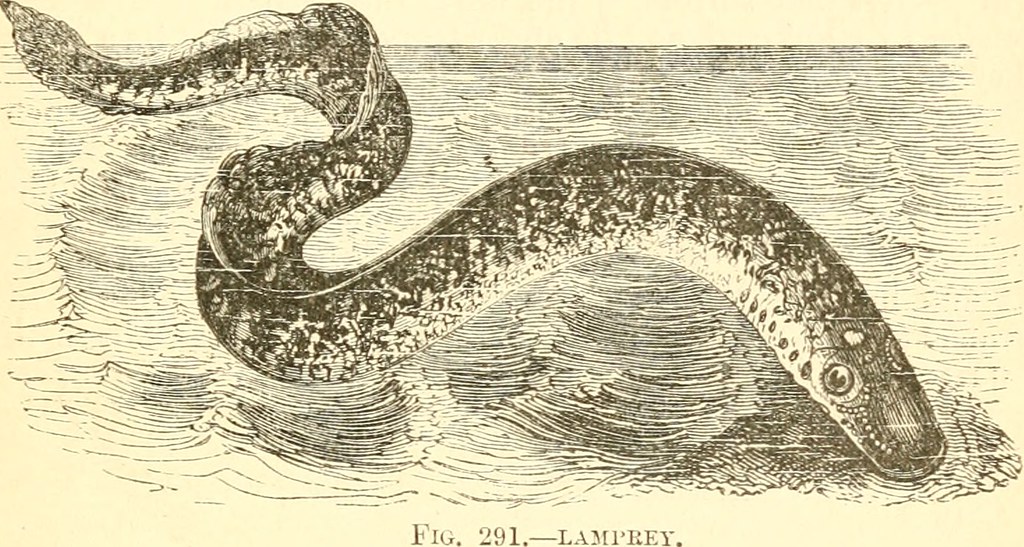